I waded into May Day on Monday morning May 3, 1971 by myself. I was 19 years old. My affinity group partner had gotten cold feet at the last moment, thus I was left on my own. I headed over to Dupont Circle which was the assigned target for the downstate NY groups. The cops and National Guard presence was overwhelming.

At one point while just walking on the sidewalk doing nothing, and having done nothing remotely illegal prior to this, I was jumped by a cop who captured me and started to lead me to the center of Dupont Circle. The circle was surrounded by the National Guard who were guarding all the busted demonstrators. 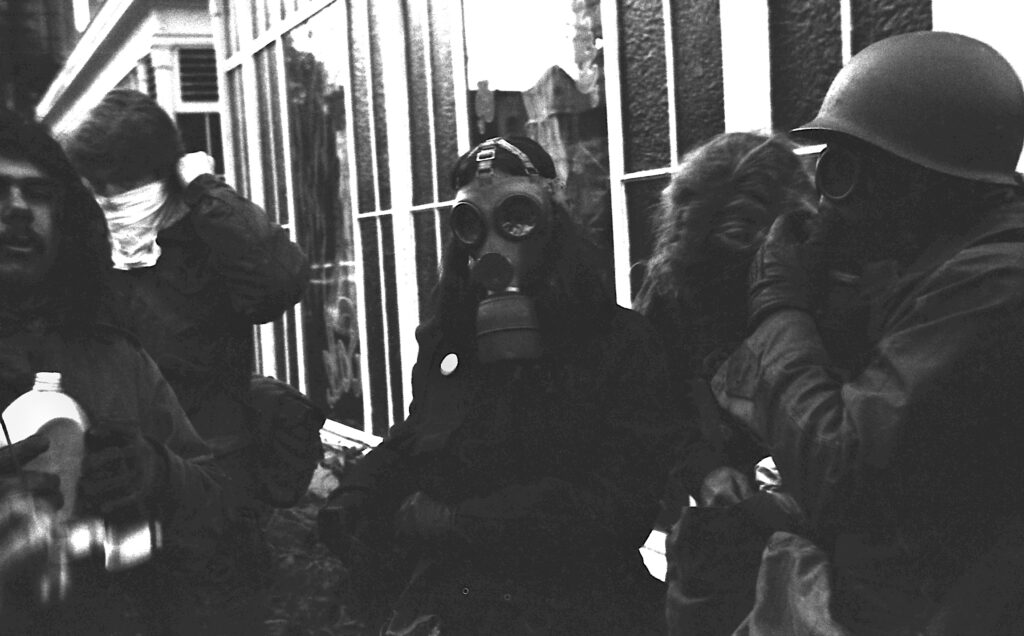 As I was being led in, a few people started throwing garbage cans into the middle of the street, thus the cop that had me let go and chased after the garbage can throwers. I skedaddled and headed towards American University where I knew I could find a safe haven among the students.

I looked for a hitch up Massachusetts Ave. and a van with a bunch of freaks in it stopped to pick me up. As I was getting into the van, I heard a small explosion and saw a flash of light and a man and woman being chased by a cop run to our van. We let them in and slammed the door to the van shut just in time as the cop who was chasing them literally pressed his snout up against the van window and we took off. They left me off at the Ward traffic circle by American University.

As I approached the circle, I could smell pepper gas and saw in the distance a long haired guy jumping up and down and wildly gesticulating with raised arms. I thought to myself, that guy’s surely going to get busted. As I got closer to him, I realized that this agitated guy was my good friend Bruce. Bruce was also on his own at this point so we paired up for the rest of May Day and were no longer loners in the streets.

On Tuesday May 4, 1971 we wound up in front to the Department Of Justice building with several thousand other demonstrators. I reconnoitered the area and noted that one end of the street had been completely sealed off by a line of cops. I went to the other end of the street and saw that the cops were starting to seal off that end too. I told Bruce that we better get out of here and we did, just in time. Eventually everyone on that street, about 2,000 people, got busted.